One of the core products of Mountain Gremlin Games has been ‘The Walking Dead: All Out War‘ from Mantic Games.  At the time of writing the game has been out for just over two years.  The release of ‘Here’s Negan‘ being next week, I thought it would be great time to talk about this exiting product range.

‘The Walking Dead: All Out War’ is a multi-faceted board game.  There are many ways to play this game including single player, co-operative and of course adversarial all following a narrative theme.  The easy to learn rules and custom character creation make this game highly adaptive to any number of scenarios outside that of the published material.  The format of the standard game makes running tournaments easy while still providing surprises by introducing a narrative theme or two.

The miniatures are of a high quality.  Each depicting a survivor or a walker.  The most notable feature of them being that each model is an individual – even the walkers.   Many figure painters are used to painting large armies of models wearing the same uniform/armour and carrying similar if not the same gear.  These figures are not only individual but most of them are wearing civilian clothing, and not everyone carries a weapon.   For a figure painter such as myself this presented it’s own challenge and reward.

A note on the scenery needs to be mentioned. While many games provide you with great figures to play with many companies overlook the terrain.  The scenery box for ‘The Walking Dead’ includes a number of supplies, vehicles and barricades.  Great value for money and can be used in a variety of games.

I was lucky enough to receive a demo copy of ‘Here’s Negan’ and spent the previous night to writing this playing it and having a great time.

‘Here’s Negan’ is a stand alone board game set in the same world as the previous game but takes place in the sanctuary.  You control a group of survivors under the command of Negan trying to accomplish a series of set missions.  It’s mainly co-operative as each player needs to work together to complete their goals, however each survivor is trying to impress Negan.  Therefore there is a competitive element, which adds an interesting dynamic to an already  challenging set of scenarios.

The great thing about this game is it keeps many of the same game components and mechanics of ‘All Out War’.  This means that it’s easy for a player of one game to jump into either system without relearning too many rules.   Again the figures are of the same high quality and fully compatible with ‘All Out War’.  Therefore there is some logic in owning both games as ‘Here’s Negan’ acts as an expansion in many ways to ‘All Out War’.

The game ships from next week.

figures painted by the store 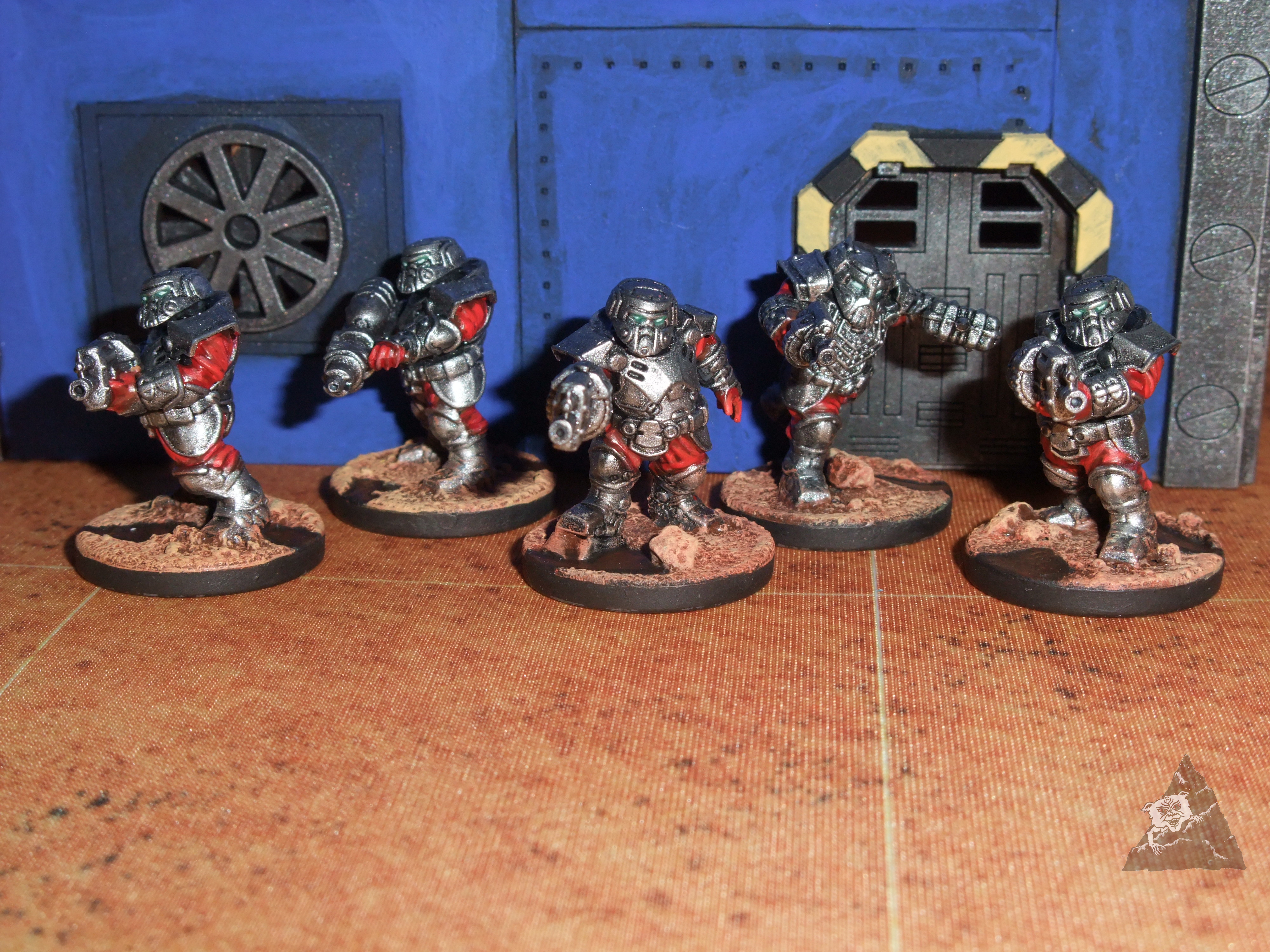 At the time of writing I have a Deadzone Demo in two weeks.  Therefore I had to paint a number of strike forces.  I have completed my Enforcers some time ago, and have planned on painting the Forge Fathers models too, but had no colour scheme.

My original idea was that they were a group of volcanic world ore miners and started making lava bases.  Since it is the Forge Fathers who made the Enforcer armour and the squads are called Steel Warriors, I thought it would make sense for the armour to be a similar colour.  Going for an old school sci-fi vibe I thought the silver would be well off set by a deep red.

Last minute however I changed my mind regarding the lava bases.  A recent game of Deadzone using the Exham IV mat, combined with the fact they are supposed to be demo-miniatures meant that the bases are now Martian, with toxic sludge.

I must say that Mantic has made some great miniatures here.  The box comes with enough extra weapons to create either a standard Steel Warrior or Stormrage Veteran squad with heavy weapons and Huscarl ( Forge Father officer) upgrades.    They were a pleasure to paint and I look forward to returning to this army when I expand it for Warpath.